Switzerland Without an Army? Palaver!

That's the title of the last longer literary text written by Max Frisch - and asks the question, if the Swiss army is still relevant. Due to the current vote on the purchase of the "Gripen" jet, I have pondered that question as well - with much the same conclusions as Frisch. 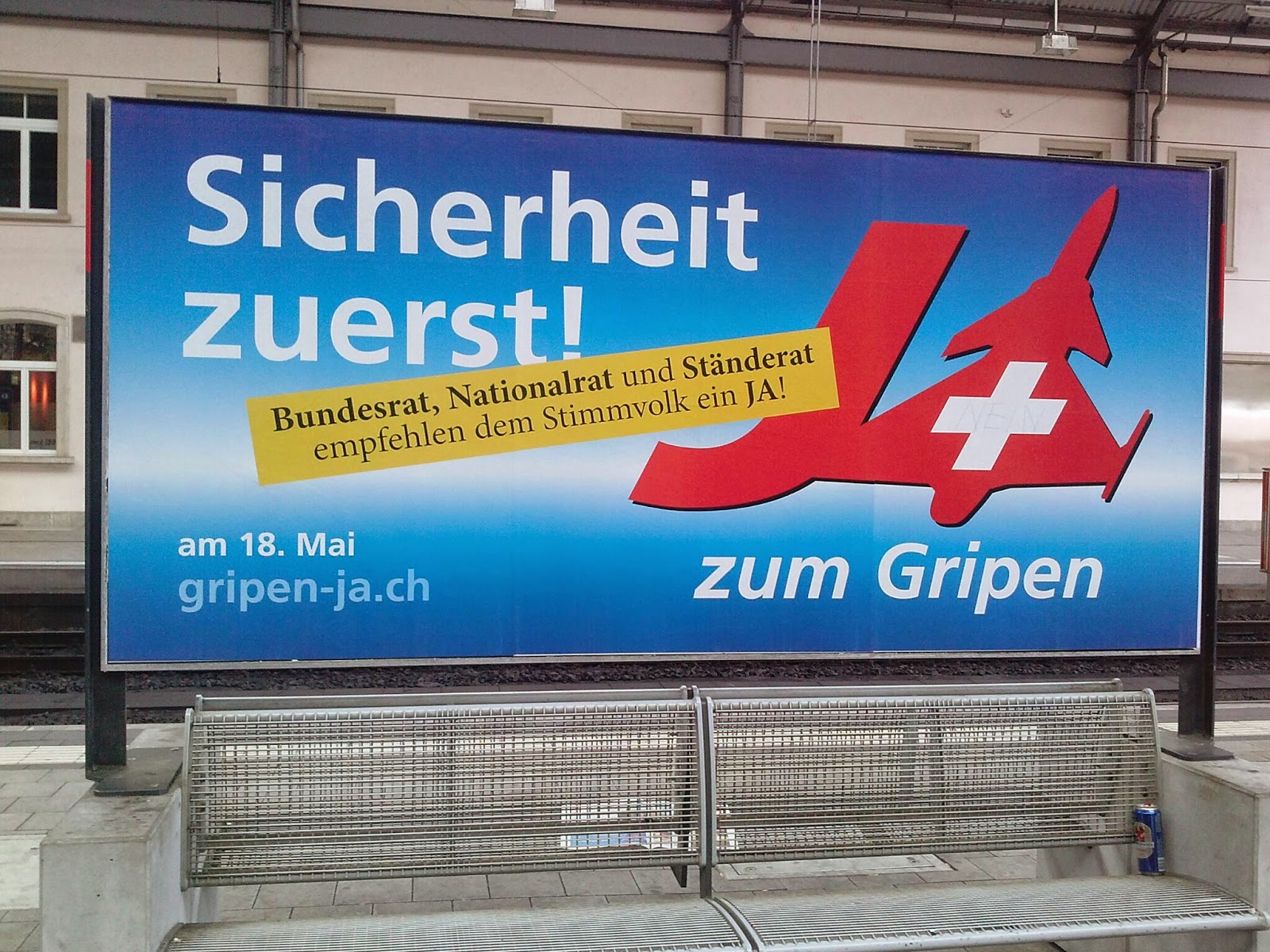 First of all, I believe that having an army is ethically wrong: theoretically, it would be correct to let others conquer you and to be killed, rather than to kill - even if that position is not realistic. One of the arguments in the vote banning Minarets in Switzerland was that Christianity basis for our society. There may be some truth in that statement, but anybody who labels himself a Christian and still supports an army cannot be a Christian at all - after all, a core tenet of the faith is to "turn your other cheek", as Jesus puts it during his Sermon on the Mount.

Secondly, since ethical arguments may not be realistic, let me consider "realistic" scenarios, where an army would actually be necessary. Maybe, Europe will degrade in the future, and Switzerland would be raided b Greek or Italian marauders. I don't really think this will come to pass, but even then defending against threats by civil persons is the job of the police, not of the army. Another scenario would be, when there is an invasion by Russia, or a second Hitler. In that case, we would speak of a World War 3, and who can say how much good an army would do then - to quote Einstein, "I do not know how the Third World War will be fought, but I can tell you what they will use in the Fourth — rocks!". In other words, as soon as any deranged person decides to launch a nuke, we can say goodbye for good.

Furthermore, there are other means of survival in the case of war. In the second world war, it was not only the Swiss army that prevented an invasion by Hitler - France, England, Poland, Russia, they all had armies and still were attacked. But Switzerland was just no target, thanks to it's size and cooperation. Similarly, time and again, there are terrorist attacks in the US with the most powerful army of the world - but none in Switzerland, just because the country is too small and because being neutral does not make you as much a sore on other's butts as other strategies do. I'm sure that humanitarian aid and involvement would be much more effective than an army ever will be in preventing others targeting your country.

And this brings me to my last point, competence. How can I trust army leadership, when US strategists seriously consider Zombie invasions? My own experience in the Swiss army did not inspire trust in the leadership of the army, where the officers mostly consisted of angry children who abused their positions to piss at those below them. For everybody I know who's had a good time in the army, I know a dozen who have not had much fun. The only use I see for the army is during times of natural disasters, where the army can provide aid. But an organization assisting in emergencies does not need to teach it's members how to shoot a gun, and hand out a gun to virtually every single male citizen in the country.

In the end, the army is just a huge waste of time and money for everyone implicated in it. Personally, I think that my time on earth is limited, and I'd much rather be fighting poverty in one of the poorest countries of the world - as I will be while completing my civil service in Madagascar - instead of learning how to kill someone with a gun.
Email Post
Labels: ethics opinion politics switzerland

The Power of Culture to Connect